The marmots were extremely busy, out and about this past weekend.  We hiked to Hidden Lake and spotted 4 separate Hoary Marmots!

I was able to get pictures of  two of them… 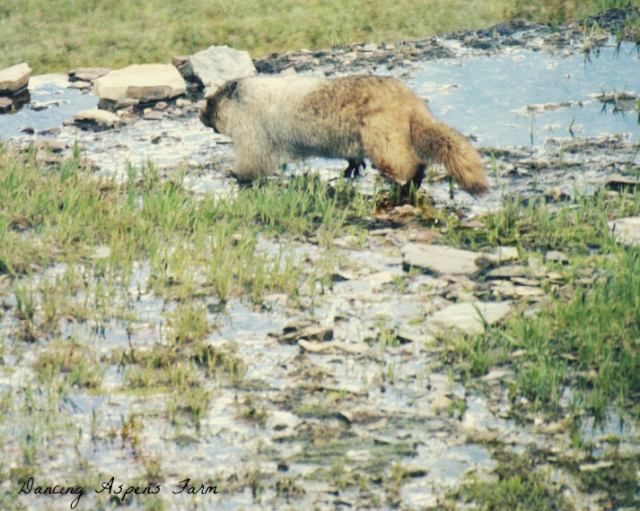 The hoary marmot is a large, bulky, ground squirrel, with short, heavy limbs, and a broad head. Adults range from 62 to 82 cm (24 to 32 in) in total length, including a 17 to 25 cm (6.7 to 9.8 in) tail. The species is sexually dimorphic, with males being significantly larger than females in most subspecies. Because of their long winter hibernation, during which they survive on fat reserves, the weight of the animals varies considerably over the course of the year, from an average of 3.75 kg (8.3 lb) in May to around 7 kg (15 lb) in September, for a fully grown adult. A few fall adults can weigh up to 10 kg (22 lb), with exceptional ones attaining 13.5 kg (30 lb).  It is reportedly the largest member of the squirrel family, though the slightly lighter alpine marmot is sometimes titled this as well.

Hoary marmots are diurnal and herbivorous, subsisting on leaves, flowers, grasses, and sedges. Predators include golden eagles, grizzly and black bears, wolves, coyotes, red foxes, lynxes,cougars and wolverines. They live in colonies of up to 36 individuals, with a home range averaging about 14 hectares (35 acres). Each colony includes a single, dominant, adult male, up to three adult females, sometimes with a subordinate adult male, and a number of young and subadults up to two years of age.

The marmots hibernate seven to eight months a year in burrows they excavate in the soil, often among or under boulders. Each colony typically maintain a single hibernaculum and a number of smaller burrows, used for sleeping and refuge from predators. The refuge burrows are the simplest and most numerous type, consisting of a single bolt hole 1 to 2 metres (3 ft 3 in to 6 ft 7 in) deep. Each colony digs an average of five such burrows a year, and a mature colony may have over a hundred. Sleeping burrows and hibernacula are larger and more complex, with multiple entrances, deep chambers lined with plant material, and stretching to a depth of about 3.5 metres (11 ft). A colony may have up to 9 regular sleeping burrows, in addition to the larger hibernaculum.

Many forms of social behaviour have been observed among hoary marmots, including play fighting, wrestling, social grooming, and nose-to-nose touching. Such activity becomes particularly frequent as hibernation approaches. Interactions with individuals from other colonies are less common, and usually hostile, with females chasing away intruders. Hoary marmots are also vocal animals, with at least seven distinct types of calls, including chirps, whistles, growls, and whining sounds. Many of these calls are used as alarms, alerting other animals to potential predators. They also communicate using scent, both by defecation, and by marking rocks or plants using scent glands on their cheeks.

Hoary marmots frequently sun themselves on rocks, spending as much as 44% of their time in the morning doing so, although they will shelter in their burrows or otherwise seek shade in especially warm weather. They forage for the rest of the day, returning to their burrows to sleep during the night.

In areas frequented by people, hoary marmots are not shy. Rather than running away at first sight, they will often go about their business while being watched.

Mating occurs after hibernation, and two to four young are born in the spring. Males establish “harems”, but may also visit females in other territories.

The word “hoary” refers to the silver-gray fur on their shoulders and upper back; the remainder of the upper parts have drab- or reddish-brown fur. The head is black on the upper surface, with a white patch on the muzzle, white fur on the chin and around the lips, and grizzled black or brown fur elewhere. The feet and lower legs are black, sometimes with white patches on the fore feet. Marmots have long guard hairs that provide most of the visible colour of their pelage, and a dense, soft underfur that provides insulation. The greyish underparts of the body lack this underfur, and are more sparsely haired than the rest of the body. Hoary marmots moult in the early to mid summer.

The feet have slightly curved claws, which are somewhat larger on the fore feet than on the hind feet. The feet have hairless pads, enhancing their grip. The tail is long, slightly flattened, and covered with dense fur. Apart from the larger size of the males, both sexes have a similar appearance. Females have five pairs of teats, running from the pectoral to the inguinal regions. 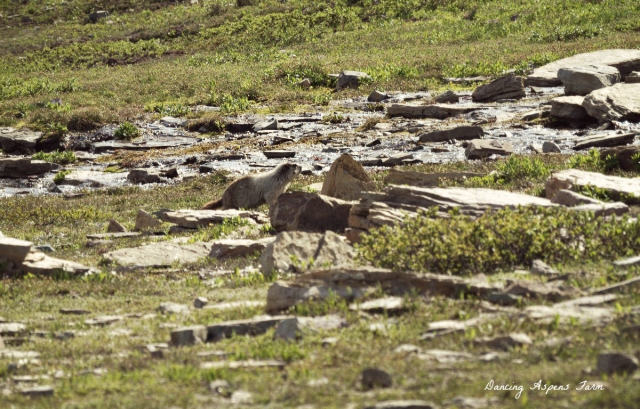