Saturday morning we found Grizzle in labor, digging nests and trying to push out her lamb.  After 45 minutes without any progress we decided we better see what was going on.  Mark found the first lamb presenting it self bottom first, so he went digging and found hind-feet and pulled the first guy.

A nice black ram lamb that weighed in at almost 6 lbs. and having a nice set of horn buds.

The second was also pulled since we weren’t sure how long she had actually been in labor for.  It was a good thing too because he was twisted all up in a knot.  It took some doing but my hubby was able to get him pulled and the little guy spun to life.

He weighed in at 6 1/2 pounds and is the spitting image of his brother and his sire, Blackfoot.

Griz is one of my best mammas!  She keeps a very close eye on her babies and always has plenty of milk.  Her lambs are always quick-growing and vigorous.

Sunday morning we awoke to Wisteria and …

He is a handsome spotted moorit (brown) ram, weighing close to 7 lbs.

and finally a little girl!

She is also  spotted moorit in color, almost an exact replica of her mama.

Every year that we have lambed we have started our names with a certain letter of the alphabet.  So the first year most of the names started with “A”, the next year “B” and so on.  This year is an “E” year and since she made her debut on Easter that shall be her name.  :0)

They were sired by Drafnar.

Monday morning we had an extra special event occur!  Our first AI lambs arrived!!  We imported semen from Iceland through our sheep breeders co-op and had the pleasure of trying to catch these girls at just the right moment and trying to Artificially Inseminate them.  This helps to keep the gene pool fresh and is very exciting to be using the same wonderful rams that are available to farmers in Iceland.

Eisa is a beautiful white ewe lamb that will have horns, she carries moorit and spotting.   She weighed 7 lbs.   It was wonderful to walk out and find these gems all dried off, up and nursing!

He is a very handsome horned white ram lamb that will carry moorit and spotting!  He weighed close to 8 lbs.

Check out his horn buds… 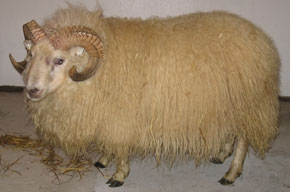 Then later that morning, poor Audna, whom was almost a week over due decided it was time to get the show on the road!

She delivered two huge ram lambs without assistance.  You could tell they were both rams before they were born, due their horn buds showing through the perineum .  Um ouch!

He is a frosted black mouflon and will carry moorit.  He weighed a whopping 10 lbs!

His brother arrived about a half hour later…

He is a very handsome moorit mouflon that weighed in at 9 lbs even!

A quick shot of Sybil and one of her boys!

And one more of Wisteria’s ram lamb, with the cool tuft of white on his head!

The kids checking out one of Grizzle’s new lambs.

I have several more looking real close, better go check on them.  Cross your fingers and say a little prayer for more ewe lambs.