Good luck to all the hunters today on opening day.  Sawyer has not been struck down by the flu yet so he, Papa and Uncle Beau went out hunting today.  They hiked about 17 miles and did see a quick glimpse of a bull elk, but were unable to fire off a shot.  They had a good day though and will have good memories of hunting together.  Here’s a picture that Uncle Jason sent us.  We have no idea if it is photoshopped or not but he still looks impressive and helps the hunters in our house to think big!  (Like they need any help! LOL) 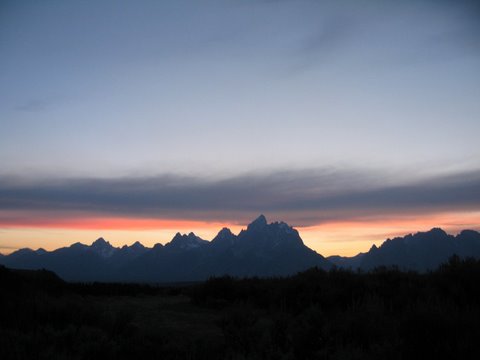 (1Cr 13:6 ESV) – it does not rejoice at wrongdoing, but rejoices with the truth.

After Mark had been sick with a cold for more than 5 days he decided to head to Urgent Care and see if he indeed had the flu.  This is the most sick I have ever seen my husband, he pretty much spent the 5 days in bed  sleeping,coughing and feeling like an elephant was sitting on his chest.  Poor guy he felt and looked terrible.  The test results came back positive for flu, the  H1N1 variety. Ugh!  He still is not feeling real well even today, he will be up for a couple of hours and then need to lay back down and snooze for a while.  The rest of us, with the exception of Tori, still feel ok.  This is Tori today… 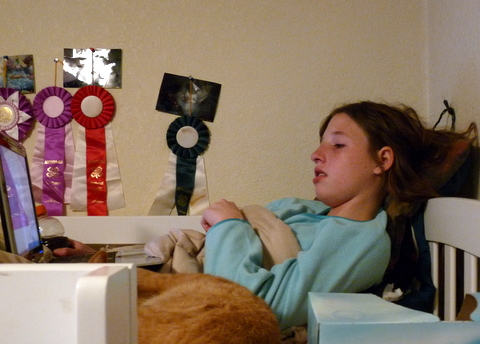 Tori sick with the flu, snuggled in bed with her cat and watching Netflix...

Tori woke up with 103 temperature this morning and a *terrible*, *terrible* cough.  She will be able to start some Tamiflu today so hopefully that will help her get over this sooner.  I guess we now “wait and see” how this spreads through the family.

Just in case you missed the ticker at the side of the blog, Zayne has some news he’s excited to tell… (besides the fact he just finished lunch!) 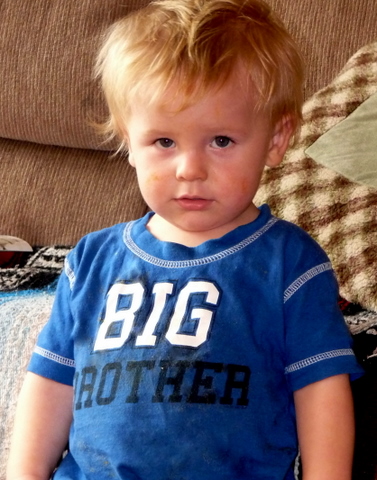 A reminder he’s our youngest…

And if you still haven’t clued in… 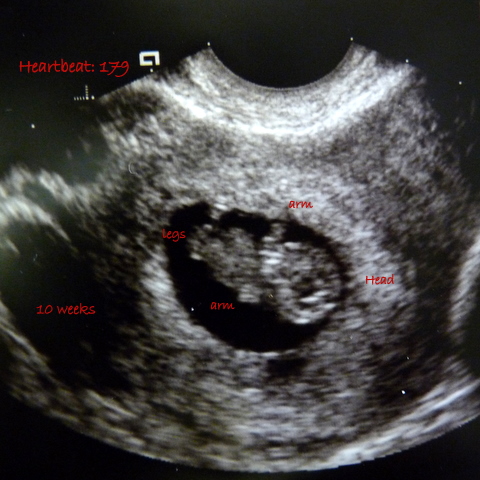 Addition # 8 should make his or her appearance next May!

And a huge heartfelt thanks to the Miller, Dunham, and Rickel Families for the wonderful and delicious suppers this week while we’ve been under the weather!  It has been a relief to just get better and not have to worry about what to make for supper.  Thanks!

“To honor Christ by eliminating abortion
through life affirming education
and intervention.”

They do this by providing women with other choices besides abortion to help mothers with an unplanned pregnancy.  Here’s a story from their lastest newsletter…

Ten years ago, Hope Pregnancy Ministries was founded with the vision of changing the life of a woman as she experiences the diffi culty of an unplanned pregnancy. A miracle happens when a woman chooses life and rejects the notion of abortion, simply because she was educated about the choices before her. At Clear Choice Clinic, we are blessed to have this opportunity on a daily basis. To see a young woman come though our door, and hear her heartbreak as she contemplates the diffi cult decision before her is an honor and a privilege. The sense of responsibility is tremendous because we realize that we may only have one chance to affect her life. One hour. One chance. One God.
Two weeks ago, “Tami” was a high school student who found herself pregnant, alone and scared. She and her boyfriend “Kevin” hadn’t told anyone, especially their parents, and had decided that they could not continue the pregnancy…they had too much to lose. Having decided to have an abortion, Tami and Kevin did what most kids do…they got on the internet. After a short search, they found the Clear Choice Clinic website and called for an appointment. The next day, Tami and Kevin arrived…scared and adamant about needing an abortion, but willing to learn about other options. They visited with a volunteer Patient Advocate, where they poured out their fears and doubts. They were given written information about the choices confronting them, and wise counsel from a loving, nonjudgmental spirit. When it was time for the ultrasound, Tami and Kevin agreed, “just to see how far along” they were. This, after all, is critical information when planning an abortion. As the image came to life on the screen, and a 9 ½ week baby became obvious, there were small smiles, followed by awkward silence. This was the baby they had chosen to abort. Before Tami and Kevin left, the nurse invited them back for a second ultrasound, explaining that they had time before they needed to make a decision, and that it would be wise to be sure that the pregnancy was still viable before they had an abortion. They agreed. Tami had the next two weeks to ponder the reality of the life inside her. Two weeks later when Tami walked through the door, this time with her mother, it was apparent that something had changed. During the ultrasound, Tami announced that she and Kevin had decided to keep the baby. When asked what had changed, she said, “Before I saw the ultrasound, the baby didn’t seem real…I thought I could just have an abortion and it would go away. Then I saw the ultrasound and it became real. When I saw it, I knew I wanted to keep it.”
Tami went on to say that she and Kevin were getting married in two weeks…they wanted their baby to share their last name, and they were ready to move forward with their lives…as a family.
Tami left us with a hug, and a promise to bring her baby to see us after its birth; we left Tami with tools to cope with tomorrow, hope for the future, and a little taste of Jesus. One hour. One chance. One God. Amen.

What better way to spend an evening?

On Saturday we had the privilege of going to Browning to help some friends of ours from church in sorting yearling bison.  Let me say this place is incredibly beautiful, located just outside the park with stunning views.  They have a wonderful little  business selling all natural bison meat~the meat is incredible, rivaling the best beef I have ever tasted…and I’m not one for anything gamey tasting-at all!  We had a wonderful day in fellowship, the men separated out all the yearlings while we women stayed back at the cabin.  I was hoping to get up to the chutes, but I have not been feeling well lately so Mrs. Dunham kept me company all day.  I just sort of  hung out for the  day and she prepared some wonderful meals.  Sawyer and Mark had a great time sorting.  Sawyer was so excited to be able to help out, as was Mark.  Mark said that they definitely do not sort or work like cows and that it is quite a feeling when they would all be running and turn around and face you…yikes!  Tori was able to take some pictures from inside a pickup…the windows were a bit fogged up but you can see what is going on… 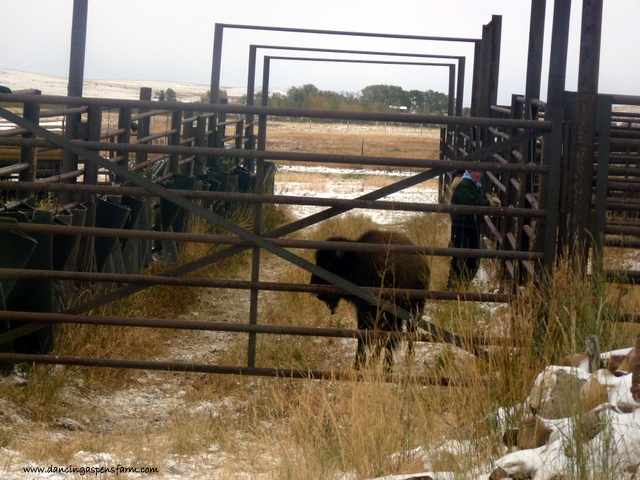 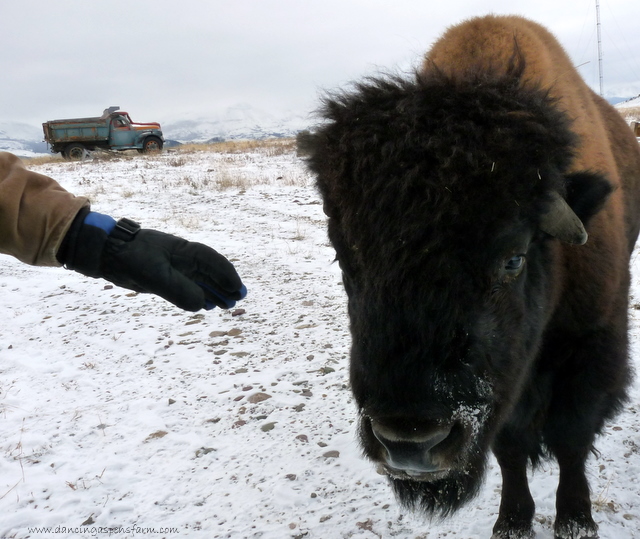 Another one of Arnold...

My dream, especially around lambing time!

Thanks for the wonderful day Dunham Family!

Well the weather forecast wasn’t too far off, we awoke to the first snow of the season on Friday.  Here’s a before and after picture… 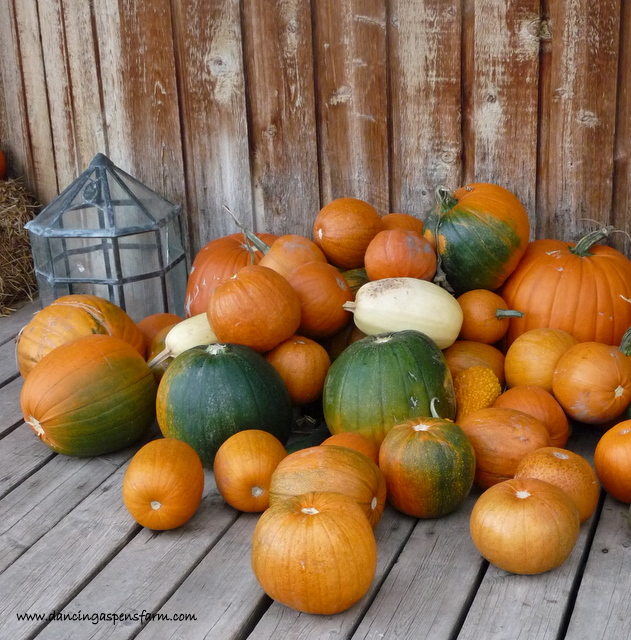 Pumpkins on the porch...

Pumpkins on the porch with snow...

The weekend was also sort of cold and miserable too, I guess.  We weren’t here for part of it because we were able to help some friends sort their bison in Browning!  This next week looks to be a bit warmer though which will be very nice, we’re just not quite ready for all this winter-i-ness stuff!

Bison and a cowbird...

(Isa 48:16 NKJV) – “Come near to Me, hear this: I have not spoken in secret from the beginning; From the time that it was, I [was] there. And now the Lord GOD and His Spirit Have sent Me.”

(Isa 48:17 NKJV) – Thus says the LORD, your Redeemer, The Holy One of Israel: “I [am] the LORD your God, Who teaches you to profit, Who leads you by the way you should go. 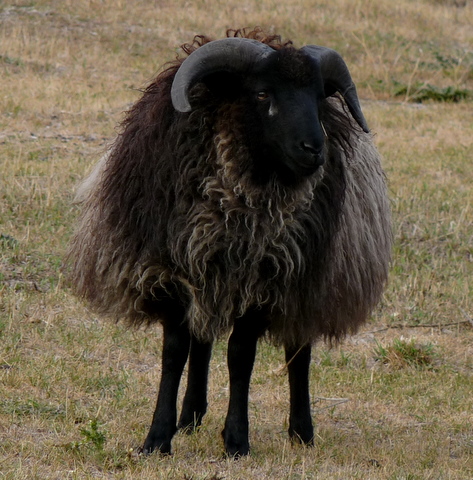 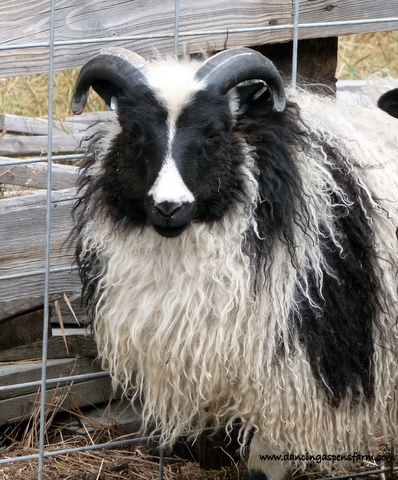 We had a few more lambs but they have either been sold or are heading to freezer camp and will sustain us for the upcoming year.   We will be keeping the rest, having the ewe lambs bred soon and letting the ram lambs grow through the winter to see how they will look for next year.   We will need to evaluate their horn growth and curvature to make sure the horns have greatly cleared the sides of their face (and will not be growing into their face),their conformation and fleeces.  Before we know it we will be in November and our rams are getting ready by turning their *stinky* hormones up a notch, getting ready for the upcoming breeding season.  We are busy thinking up breeding groups for the upcoming months and are day dreaming about next seasons lambs already!

A MUCH COLDER SYSTEM WILL DIVE OUT OF CANADA THURSDAY NIGHT BRINGING WITH IT SNOW AND VERY COLD TEMPERATURES. SNOW ACCUMULATIONS OF 1 TO 2 INCHES ARE EXPECTED BY FRIDAY MORNING. HOWEVER… THE MAIN IMPACT FROM THIS STORM WILL BE STRONG GUSTY NORTHEAST WINDS 15 TO 25 WITH LOCAL GUSTS TO 35 MPH CREATING BLOWING AND DRIFTING SNOW. THESE WINDS AND VERY COLD TEMPERATURES ARE EXPECTED TO CONTINUE INTO FRIDAY.

A WINTER WEATHER ADVISORY MEANS THAT PERIODS OF SNOW… BLOWING SNOW… OR FREEZING RAIN WILL CAUSE TRAVEL DIFFICULTIES. BE PREPARED FOR SLIPPERY ROADS AND LIMITED VISIBILITIES… AND USE CAUTION WHILE DRIVING.

I guess we need the moisture…but snow?  At least the kids are excited!   ;0)